I keep seeing what my family is now calling the “Jane chairs” all over Basingstoke but wasn’t exactly sure what was going on with them.

So I was really pleased when a local Marketing company contacted me to ask me to share what it’s all about with the lovely NHM Community.

The trail maps are available in print in places such as The Willis Museum or available for download on www.sittingwithjane.com

‘Sitting With Jane’ is a public art trail in Basingstoke, Hampshire that opens on 17 June. The trail is made up of 24 ‘BookBenches’, each designed with a Jane Austen theme to celebrate Jane Austen’s birthplace and home for 25 years of her life, 200 years after she died.

Each BookBench acts as a 3D canvas – making the finished piece, not only a work of art, but an attractive piece of street furniture that will be accessible for all to see and sit on, to contemplate the artist, Jane Austen or the scene and landscape where it is located. It forms part of a worldwide celebration of Jane Austen’s life, and the ‘Jane Austen 200 – A life in Hampshire’. Sitting With Jane is being organised by not-for-profit company Destination Basingstoke, with headline sponsor, Festival Place. 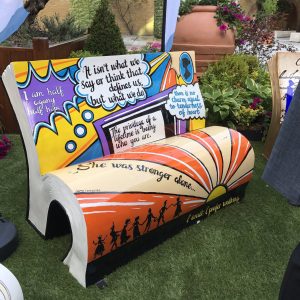 The BookBenches have been designed and painted by a range of artists and are being installed in locations around Basingstoke and Deane  borough as well as in Alton, Chawton and at Winchester Cathedral. The trail will take people on a voyage of discovery of original pieces art and locations that played a part in the Jane Austen story. There is free access for all whether they are Jane Austen or art enthusiasts or just want a free family day out.

A free to download app is now available to guide people around the trail, and a trail map is available at local outlets. 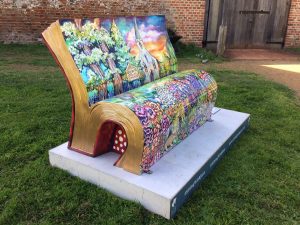 “This is the culmination of months of work and it is very exciting to see not only all the artists’ work, which is spectacular,  but to see the BookBenches installed into places that showcase the Basingstoke area’s heritage, past and present”, said Felicity Edwards from Destination Basingstoke.

“We are really excited to see Sitting With Jane coming to life for everybody to enjoy this summer. It’s such a creative and inclusive way to celebrate this important anniversary, and the artists have clearly been inspired by the Jane Austen story and its connections with Basingstoke. Following the trail the grand auction of BookBenches offers the chance to own a unique piece of art while helping Ark Cancer Centre Charity raise valuable funds.”, added Sally-Ann Wilkinson, Director of Wild in Art. 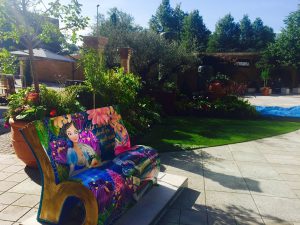 The ‘Wild in Art’ event, is delivered by Destination Basingstoke as part of their work to showcase the quality of life in the Basingstoke area, this project is in association with Festival Place. The project is funded entirely by sponsorship and all of the BookBenches will be auctioned with proceeds to charity on 15 September.

“The charity will receive 75 per cent of the proceeds raised from the auction of the BookBenches on Friday, September 15, and all of that money will help to fund the much-needed local cancer treatment centre. By looking after, as well as enjoying, the BookBenches, members of the public will be helping to ensure that the best sale price can be achieved for each one at the auction, and the largest possible sum is raised for the charity, so thank you in advance for your support.” 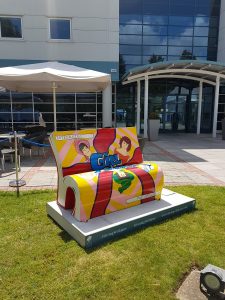 More information about the companies and charities involved

The idea for Sitting With Jane has been developed by Destination Basingstoke as a creative way to encourage visitors to explore in and around Basingstoke to enjoy everything the area has to offer from the superb countryside, great leisure and cultural offer as well as appreciate the wealth of local history and heritage – and especially the area’s strong connection with Jane Austen. The project forms part of the ‘Jane Austen 200 – A Life in Hampshire’ project led by the Hampshire Cultural Trust. The project is entirely funded by sponsorship with Festival Place the headline sponsor. Destination Basingstoke will not receive any of the income from the charity auction.

Ark Cancer Centre Charity is the charity partner of the Sitting With Jane event, and is raising £5million towards a unique local cancer treatment centre that will be built in the Basingstoke area.

The success of Ark Cancer Centre Charity’s £5m appeal will ensure a range of support services and complementary therapies are available alongside chemotherapy and radiotherapy treatments in a calm and uplifting environment.

The new centre is largely being funded by Hampshire Hospitals NHS Foundation Trust (HHFT). It is earmarked for a location in the Basingstoke and Deane area, and if the preferred site near to Junction 7 of the M3 is approved, it will be easily accessible to everyone in the HHFT region. 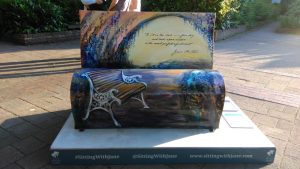 Wild in Art is one of the leading creative producers of spectacular, mass-appeal public art events, which connect businesses, artists and communities through the power of creativity and innovation. Since 2008 Wild in Art has animated cities across the world including Sydney, Melbourne, Cape Town and São Paulo and created trails for the London 2012 Olympics, the 2014 Commonwealth Games in Glasgow, Historic Royal Palaces and Aardman Animations.

Wild in Art events have: