We had lots planned for the Easter weekend, but didn’t do any of it because my little one had a stomach bug. We’ve been trying to make up for it since then and been to quite a few places. So I have lots of reviews coming up over the next few weeks. Hope you find them useful!

I’ve been to Alice Holt several times, but not with a couple of toddlers in tow. We went to Alice Holt when my little one was a few months old and it was great to get some fresh air and go for a big long walk. The paths are suitable for most pushchairs, and a couple of routes are designated for wheelchair access.

We parked in the first car park on the right (the one most people initially park in) and went for the walk that was on the right. It’s between 1 mile and 1/5 mile. I think we did the 1 mile, which both toddlers coped with. There were some wooden scupltures and a picnic bench at once point, the toddlers played with the sculptures as they were tactile sculptures. Then further around the walk were several bivoacks made out of wood. We had much fun going in between these. One was supposed to be for wheel chair access, but it didn’t actually look accessible. Great idea though!

We went on a Friday, so it wasn’t very busy and we didn’t see anyone else on our walk. However, I’ve been on a weekend and it can get very busy in the car park, so either get there early, or continue past the first car park and park in the second car park which is behind the new toilet block.

It took us about 30 minutes to get there from Basingstoke, and we went through Farnham rather than the Alton route. 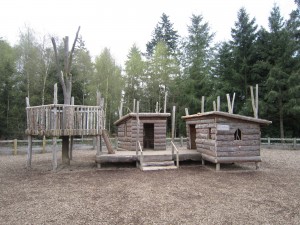 Was AWESOME! I wish we’d had play areas like this when I was little. The two wooden houses were fantastic, but without doubt, the pirate ship was the BEST! 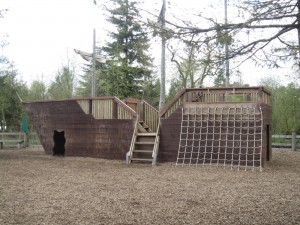 The food was excellent. I was really impressed. Definitely worth the money. It wasn’t too expensive either, for what it was. There were a couple of “healthy” options for little ones too, not just the standard sausage or fishfingers or chicken nuggets with chips.

There are lots of picnic tables around Alice Holt and we saw several groups of Mum’s with their babies, out for a picnic and some fresh air. This would be a great place to meet with a group of ante-natal or post-natal friends.

Is quite expensive for what it is, BUT you don’t have to pay an entrance fee, so I don’t mind paying it. It’s £4 for 3 hours parking, which was enough for us, with a walk around the forest (with two toddlers and a baby), some time in the play area and lunch.

Were excellent. They’ve just built a new toilet block which was obviously in really good condition. The baby changing facilities were excellent and everything worked as it should. There is also an information block attached to the new toilet block, but it hasn’t opened yet. You can also hire bikes, including the trailors for little ones. Go Ape is also available here.

(We would have given it 5/5 if the pirate ship steering wheel actually moved! But then we realised this would be a really bad idea from a Health and Safety perspective, but still!)