I was VERY lucky to be invited to review a number of places within Festival Place this weekend.

I am going to be publishing all of the reviews throughout today so look out for them! 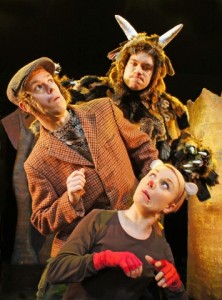 Gruffalo at the Haymarket

Festival Place is a great shopping centre and has so much on offer.

So I was delighted when I was offered the chance to review a performance of the Gruffalo at The Haymarket in Festival Place.

Last year we went to see “Room on a Broom” at the Haymarket and much as I enjoyed it, Miss NHM (who was two and a half at the time) spent the whole time wrapped around my neck wimpering. She’s a bit of a wuss (like I was at that age) which those of you who were at the NHM Meet Up on Friday would have seen! lol.

After the performance she did say that she really enjoyed Room on a Broom but I haven’t taken her to a performance at the Haymarket since.

I got completely confused and thought the performance was at The Anvil. We could have possibly got away with it had been at the Anvil.

I did think that maybe now that Miss NHM was a year older (three and a half) she would be ok. She wasn’t.

We had complete meltdown when she realised where she was and she refused to even go into the theatre.

The Haymarket team were fantastic and said I could rescheduled the performance so I asked my lovely friend Sophie who has been a long time supporter and Guest Blogger on NHM, whether she would like to take her little girl instead, so the review could still be done.

Thank you very much to Sophie for stepping in with less than 45 minutes before the performance started and thank you for your fab review below!

Here are her words!

I took my three year old daughter and nine year old step-son to the Haymarket this morning to see the Gruffalo.

They both enjoy reading and/or watching The Gruffalo on a weekly basis (I have had to put a limit on it as I found myself quoting the story randomly throughout the day) so I was intrigued to see how they would respond to a live version.

Well, they loved it!

The story telling included all the lines from the book with extra lines and a few songs interspersed.

The costumes were (very) simple but made the characters easily recognisable and also added to the character accents used – upper class fox, RAF owl and Spanish (possibly Mexican as I’m not great on accents) rattle-snake.

There were also some great snippets of humour to do with this characterisation which totally went over both my children’s heads but had me giggling.

All in all it was a very simple but cleverly put together show which we all enjoyed and which has given me the push I need to make sure I don’t miss the next Julia Donaldson live show. 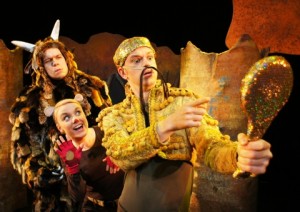 On a practical level

I was a bit stressed to be arriving at the Haymarket at 10:30 thinking there would be queues not to mention fitting in toilet stops before the hour long performance. (Louise – I gave poor Sophie 15 minutes notice, so I’m not surprised she was stressed! lol).

I needn’t have worried, the staff were so well organised it took just two minute to pick up our tickets and there were plenty of toilets (and a baby changing room) on both floors so there was no queue here either.

The ushers were really helpful; pointing out an alternative set of stairs, double checking the seat numbers as they were a bit faded, fetching a booster seat for my little one (which had two heights – not seen that before) and pointing out to my step-son that he had forgotten his coat.  I am sure I would have noticed, eventually!

The volume was just right, I was really surprised at the level of the volume at the cinema the last time we went and I was worried this might be the same.  The loudest noise was my daughter joining in with the Gruffalo song.

The lights also stayed at a good level so I could always see how the children were reacting to the show.  I didn’t have to delve into my bag for any child related items but I am sure I would have been able to find them if I’d needed to.

Tthank you very much to Festival Place and The Haymarket for organising our tickets!

Disclaimer: This post is a review of The Gruffalo at the Haymarket Basingstoke and is in conjunction with Festival Place. Our tickets were supplied free of charge for the purposes of the review.

I (and Sophie!) were not expected to write a positive review and any opinions expressed are our own. 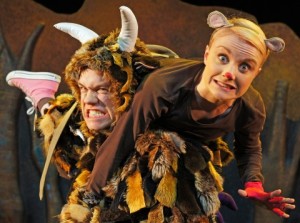