This post is for Jo who thought I said “Goop” and then thought I was best friends with Gwyenth Paltrow because she has a blog called “Goop” :-D.

I’ve been wanting to do this for ages with Miss NHM, since before she was born! I can’t even remember where I first found out about Gloop, but it’s such a simple idea and a very cheap activity.

What you will need

Slowly add one cup of water to two cups corn flour in a bowl. 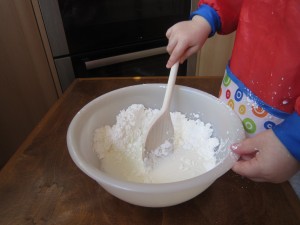 Stir until the water is absorbed by the corn  flour.

Add buttons. Fishing buttons out of the gloop is great for your little one’s fine motor skills. 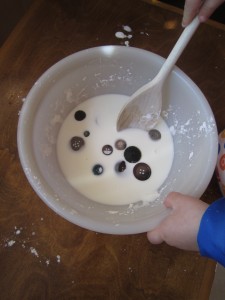 Miss NHM played with the Gloop for about an hour. We had a brilliant time playing with it and fishing the buttons out added another dimension to her interest.

Go to the toilet before you start. I didn’t do this and spent most of the time playing, wishing I had gone beforehand! The thought of leaving Miss NHM on her own or trying to get her to stop playing just wasn’t an option! 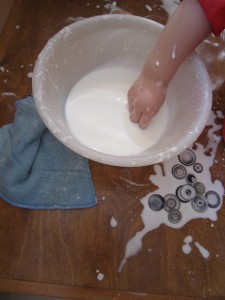 Don’t use fabric buttons like I accidentally did. Duh.

Do this somewhere that you don’t mind getting dirty. We found the kitchen was the best place. I probably wouldn’t do this in a carpeted room. 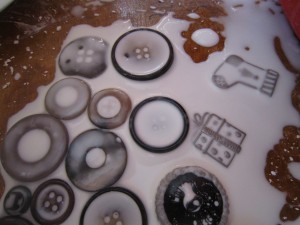 You can also step it up a level by adding either food colouring or food essence. We might try this next time.

Also, if the weather is nice next time we try this, I will try this outside.

Let me know if you enjoy this activity as much as we did!