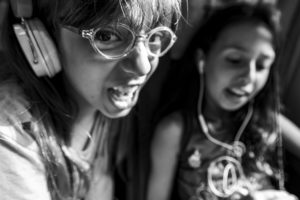 I had a bit of a random question from a friend which I thought I’d ask the NHM Community for advice on: “I’m trying to introduce my son and daughter to really good music, especially the classic tracks (not classical) from the last 50 years. What specific tracks would you recommend?”

I LOVED all of the suggestions, now listed below, and decided to steal some myself. THANK YOU!!!!!

NHM Readers Recommend: Classic Tracks to Introduce to Your Kids

Matthew said “Acdc just get out classic rock and 80’s etc there are loads but just play them in car that’s what we do and kids love them.”

Emma said “I love a bit of rolling stones! Though don’t listen to the lyrics too much so couldn’t say how appropriate they are”

Cerys said “My teenage boys are huge Stones fans. We took them to see them live in Southampton earlier this year and they loved it.”

Hayley said “Requested in our house:
Levellers – One way, Beautiful Day, Angels.
Most songs by Bryan Adams.
Guns’n Roses – Sweet child of mine.
Rolling Stones – Sympathy for the Devil, Paint it black.
Aerosmith – Pink, Crazy.
Most songs by the Beatles.
Bon Jovi – Livin’ on a prayer, Always.
Blue Oyster Cult – Don’t fear the reaper.
Madness – Our house, One step beyond.
Specials – Ghost Town
Fleetwood Mac – The Chain, Landslide”
The girls also like a bit of Metallica, Rob Zombie, Oasis, Coldplay & Pearl Jam too.

Melrose said “Love the Levellers, been a fan since 92! Saw them last week in Bristol as part of their 30th anniversary tour, just as brilliant as ever.”

Hayley said “Melrose Hall I think we’ve spoken about them before actually when I used to take my daughter to playgroup at Melrose…They’re one of our favourite bands, we’ve taken the kids to the Beautiful Days festival for the last few years – they love it”

Wendy D said “Just buy now 100, see what they like on it and go from there. My kids love the Smiths. The ministry compilations are also pretty good for trying out different types of music and kids love songs they know from films.”

Cerys said “My 15 year old is sick of Queen! He likes 2 door cinema club, the Killers, the Gorillaz, 21 Pilots, Jimmy Hendrix, and all sorts of people I’ve never heard of”