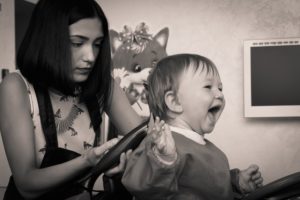 I asked the NHM Community to help with a question that I had received: “wonder if anyone can help? I have a 2.5 yr old boy who point blank refuses to get his hair cut. He screams, throws his head around, cries, hits out etc etc. We have tried places like his n kids with the little cars and cartoons on. We’ve tried bribery with sweets and toys etc. Also tried cutting at home, having daddy have his cut in front of him. Even tried cutting it in his sleep but he sensed it and woke up. Any miracle workers out there as I am out of options and his hair is an inexplicable mess! Thank you!!!”

Many thanks for all of your suggestions, listed below in no particular order.

Gina said “I have friends who’s children were a nightmare and I can highly recommend the blonde barber on sherbourne road. She is amazing with children! The Blonde Barber”

Kathryn said “Lisa at cut’n’drive is brilliant, she comes to the house and is the only person my 8 year old will let touch her hair.”

Emma said “Trilbys on Pack Lane are absolutely brilliant with my 2 year old. He doesn’t like his hair being cut where we get the tantrums. Ask for Claire she is amazing”

Clare said “Milly at the Topiary in Old Basing is really good. My little boy has never been a big fan of having his hair cut but she’s really patient with him and he’s definitely warmed to her!

Rachel said “We cut it at home. He’s 4.5 and has only just started to improve. We’ve had hairdressers cut their own fingers before. If your in Basingstoke try Marianne’s hair salon. She’s very good but we just persevere at home with clippers”

Nikki said “My eldest went through this phase. We found Carey’s in town (no frills and no special cars!) put him most at ease, but what really cracked it for him was getting him his own little (plastic) hair dressing set and water spray. He used to take a cuddly toy, his spray, comb and scissors, and would concentrate on being the toy’s hairdresser while his own hair was really being cut.”

Heather said “Kerry was it house of handsome you went to? They were brilliant with my nephew who was the same and now is absolutely fine about having it done.”

Becki said “David Saunders cuts my kids hair. He comes to our home”

Jenni said “Sorry no help but my little 2.5 year old boy is the same, though after lots of bribery etc he’ll eventually get it done with lots of moaning & crying…”

Jennie said “Honestly I just stopped getting it cut, he’s 7 and his hair is down to his bum, he’s happy and will get a trim every now and then/ There is a messy phase when growing the hair but just ride it out, it’s better than fighting”

Leanne  said “We just didn’t make him. We decided it was his hair and his decision so bought hair clips. He’s now (3.5) has it cut fine!”

Karen said “I’d probably leave it for now as he is still very young. Maybe try reading and looking at books involving hair cuts – my boys loved ‘Barry the Fish with Fingers and the Hairy Scary Monster’. Get him used to the idea and that it is a good thing and won’t hurt him. Also have you tried it with him sitting in your lap? That used to help when my son got upset about hair cuts, think he felt a bit safer.”

Wendy said “I think you just need to leave it, he’s not ready for it yet. Leave it until he’s old enough to really explain to you why it’s an issue for him. Both my sons have shaggy 70s style hair and really like looking different to the boys with ‘work hair’.”

Philippa said “My daughter is completely terrified of having her hair cut. We’ve given up and waiting it out. We’ve explained that it will help stop her hair being so tangled but to no avail. I always cut my children’s hair at home in a calm environment but no use for my youngest. My advice is give up and embrace the mess!”

Genni said “We have only had his hair cut once. I trim the fringe every now and then if he lets me.”

Ruza said “My son has had his haircut, then not, then again and our last try was too traumatic for the both of us. At some point he may want it.”

Milly said “I would leave it. He may change his mind on his own.”

Gail said “If all else fails, just leave it long, he’ll want to get it cut at some point. He might be doing it to get attention, if he thinks it bothers you.”

Marion said “Find out what it is about it that bothers him. Does he think part of him is being cut, and he’s scared it’ll hurt? Or does he like it long? What doesn’t he like about it?”