In November 2018, a NHM Reader asked: “Where are the best places to visit Father Christmas in the Basingstoke area for a 1 year old? I’ve seen loads of places advertised but don’t know where is recommended?”

Thank you for all your responses, they are listed below in no particular order.

All opinions are the readers own and are not that of NHM.

Wendy said, “Proteus would be well worth a visit at that age, then I would just do festival place for the present and photo op, your looking at £10 minimum for almost all other Santa’s.

Charlotte said, “4 kingdoms is always brill have taken my son since he was a baby and now he’s 4.”

Samantha said, “We took our 9 month old last Christmas to the Santa in Festival Place. Did the job and you didn’t pay for all the other bits. On reflection, perfect for the age but probably once they hit 18 months plus you’d be looking for a bit more of an ‘experience’.”

Mary said, “At Proteus the show is interactive and sensory, made especially for little ones. You move around the space so little ones aren’t expected to sit still for long stretches. Here’s a link: http://www.proteustheatre.com/whats-on/the-magical-christmas-toy-shop Santa will feature but it’s very gentle and not a one on one grotto experience.”

Joanna said, “Active tots is good but is just outside of Basingstoke.”

Becky said, “We went to Miller’s Ark. Our little one was a little young at 8 months but the doggie there made her day!”

Don’t miss out on future posts like this – you can receive updates directly to your inbox by email by adding your email address to the box on the top right of this page and hitting subscribe. You can also follow NorthHantsMum on Twitter, Facebook Profile, LinkedIn and Feedly. I hope to see you there! 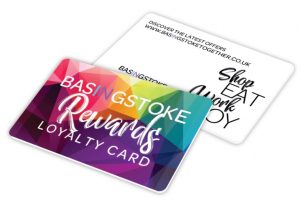 Shoppers in Basingstoke can now reap the benefits of supporting the Hampshire high street as a new loyalty card scheme has been launched to encourage residents to love local.

The Basingstoke Rewards scheme, which is available from today (Thursday 1 November) courtesy of Basingstoke Together, gives shoppers access to a wide range of offers and discounts. A wealth of Basingstoke businesses and national chains are supporting the scheme including shops, restaurants, solicitors, recruitment agencies, insurance companies, sports and leisure facilities.

The card boasts discounts including 10% off in Topshop, Monsoon, Accessorize and Yankee Candle as well as 20% off in Zizzi, a month’s free membership at Anytime Fitness, 40% off Taylor’s Hair & Beauty plus many more.

Lucy Boazman, Chief Executive of Basingstoke Together, said: “The new Basingstoke Rewards card is packed with brilliant ways to save money from an impressive range of retailers throughout the town centre.

“There is huge pressure on high streets throughout the UK to combat the ever-popular trend of shopping online. So, we hope that people in Basingstoke will support local businesses by visiting the town for all of their shopping, leisure and business needs. They can also be happy in the knowledge that their money will be going further by doing so.”

Basingstoke Together is the public face of the Basingstoke Business Improvement District (BID). The BID’s aim is to help Basingstoke town centre to thrive by creating destination events, engaging with consumers and supporting retailers and businesses. The organisation hopes that the loyalty card will encourage more shoppers to visit Festival Place, The Malls and the Top of Town as value-for-money shopping destinations.

Shoppers can save every time they make a purchase at participating venues by showing the specially created loyalty cards. The card, which will be valid until 31 March 2021, costs £2 as a one-off purchase and it is available from the Basingstoke Together website from today (Thursday 1 November).

Fran Balogh from The Salt Lounge, in Feathers Yard, which is offering 20% off treatments to Basingstoke Rewards card holders, said: “We try to encourage people to use a more natural way to heal their respiratory and skin problems. This new loyalty card enables us to achieve this by making treatments more affordable. Being able to get involved in the project and offer customers discounts in businesses like ours really is a great opportunity for us and our valued clients.”

Shops and brands who are part of the Basingstoke Rewards scheme include:

For more information or to purchase a Basingstoke Rewards card, visit https://www.basingstoketogether.co.uk

Thank you very much to “H”, one of the NHM Writers, for today’s review.

On Sunday 24th July, Festival Place hosted story time with Paw Patrol. The event had been advertised around the shopping centre for some time.

On the day the session times were shown on a sign at the entrance to the ‘pen’ as well as on the Festival Place Facebook page.

Sessions were held in the square outside M&S. We went to the final session of the day at 3:30pm. The first people in the queue were there at 3pm and they started letting people into the pen at 3:15pm.

There were maybe 50 beanbags on the floor for the children to sit on (parents were asked not to sit on beanbags).

As far as I could tell everyone got in who had been queuing although not all of the children got a beanbag. There was also the option of standing around the outside of the pen and a lot of people were doing that.

At 3:30 Marshall and Chase arrived in costume along with a storyteller. There was some call and response and cheering to ‘warm up’ the crowd and then two Paw Patrol stories were read – one about pirates and one about a birthday party.

I had my three year old and baby in tow.

The three year old is a huge paw patrol fan and was very excited about meeting Paw Patrol. He had a brilliant time and a huge grin on his face all the way through.

The baby was a little less impressed but sat on my lap relatively still watching the action.

The storyteller was enthusiastic and did her best to bring the stories to life. Unfortunately the sound wasn’t great (I would guess due to the space) and many of the children had clearly stopped listening after a while.

Despite this, looking around, all of the children seemed happy to watch Chase and Marshall prance around and weren’t too concerned whether they could follow the story.

Overall we had a really good time and I would go to this kind of thing again.

I had avoided them in the past thinking they would be ridiculously busy but it wasn’t nearly as bad as I’d expected.

Parents – be prepared for sitting on the shopping centre floor!

It’s fine to queue up with pushchairs but you will then be asked to leave them at the back of the pen.

Once you’re in the pen you’re pretty much in for the whole session so if you think your child won’t want to stay for all of it (it was maybe 20-25 mins long) you may be better off getting a good spot standing on the outside of the pen.

If you want a good seat and view, it’s worth queuing up early.

Prepare your child that they probably won’t get to ‘meet’ the characters – one child did try to go over and say hello at the end but Chase and Marshall were ushered away.

All Festival Place facilities are available during these events including baby change/family toilets/restaurants etc.

I’m soooo excited to see that the “All Our Own Crafts” team are back, even bigger and better than before!

Many of the 40 local crafters in the shop are NHM Readers and Supporters and I’m delighted to see that there are so many people involved.

Congrats to Tracy, Kate and the team and I’m sure it will be a HUGE success!

A new POP-Up craft shop in Festival Place, Basingstoke will launch with a grand opening on Saturday 18th April 2015.

This project was devised by Basingstoke residents Tracy Braybrook and Kate Donohoe who originally opened All Our Own Crafts in October 2014 for 3 months, giving local residents a unique chance to retail their crafts within the busy shopping centre. This will be the second time All Our Own Crafts will be in the centre, with the shop opening in April.

Festival Place have granted the pop-up shop the use of an empty unit opposite Laura Ashley for a two month period. It will display the crafts of 40 local people.

All Our Own Crafts will hold a grand opening from 9am on Saturday 18th April 2015 with lots of fun activities within the shop.

Normal opening hours will be Monday to Saturdays 9am to 6pm and on Sundays 11am to 5pm.

I am so excited about the new All our Own Crafts shop opening!!!!

Most of the crafters displaying are women running their own business from home, so this is your chance to support your peers.

It will also be a great chance to get some unique Christmas presents sorted!

Several of the local crafts-people in the shop have featured on a Guest Post at  NHM over the years.

It’s so great to see that they are finally getting the recognition they deserve!

All Our Own Crafts

A new POP-UP craft shop in Festival Place, Basingstoke will launch with a grand opening on Saturday 11th October.

All Our Own Crafts, a project devised by Basingstoke residents Tracy Braybrook and Kate Donohoe after seeing the success of the All Our Own Work art gallery, gives local residents a unique chance to retail their crafts within the busy shopping centre.

The All Our Own Crafts Pop-Up Shop is situated opposite T K Maxx in the unit that was previously Millets.

Featuring the handmade work of over 20 local crafts-people, we will be displaying work from crochet to candles, children’s clothing, prints, glass, ceramics and much more.

We hope to be running workshops at our demo table so people can learn how to make their own crafts.

We will also have crayons and paper so Mums can browse whilst their little ones do some drawing. People are also welcome to pop in to do some knitting/ stitching  etc and have a chat.

We are having a preview week from Monday 6th where people can come in and browse and buy.

We’ll be adding more stock over the week leading to our grand opening on Saturday 11th with lots of fun activities for all the family.

This will run from midday-5pm.

We have this unit for a three month period only but it will be perfect for people looking for handmade, unique gifts for Christmas.

Most of our crafters accept bespoke orders and are happy to create custom items.

Normal opening hours will be Monday to Saturdays 9am – 5pm and on Sundays 11am – 5 pm.

For more information, visit All Our Own Crafts or on Facebook: https://www.facebook.com/AllOurOwnCrafts/