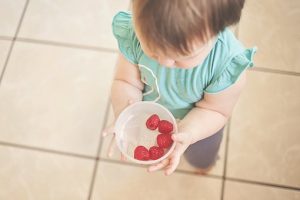 Thank you all for the replies we had regarding a question on baby-led weaning from a member of the NHM community: “I need some inspiration on baby led weaning foods for lunchtime and dinner time. I’ve done the cucumber sticks, carrot sticks, pasta but am wondering if anyone has any other suggestions?”

Thank you also to Juliet who put this post together!!

Shona says “This Facebook page gave me so many awesome ideas outside of the normal ones… worth a look.” Weaning, starting solids/finger food- Friendly Support & Guidance

Catherine says “pasta is my fav with mascarpone cheese and some herbs as it’s salt free or sometimes I use an Ellas pouch for sauce. Avocado toast, grated courgette in pancake mix. Peas are great when they get their pincer grip. I also use a lot of preloaded spoons for rice or lentil dishes etc.”

Jennie says “We do a cooked chopped broccoli with breadcrumbs, cheese, chilli sauce and egg mixed together and baked in a Yorkshire pudding tray that goes down well”

Laura says “Mine loved peas and broccoli for weaning and still loves them now at 4. Steam til they’re soft enough to go a bit mushy. But a great intro to green veggies.”

Lottie says “With blw I have just always given my daughter whatever meals I am having. She enjoys chilli, curry, gnocchi and bangers and mash at dinner time. For lunches we have crackers with cheese, wraps, quiche and sandwiches. Just have to be mindful of salt intake!!!”

Rachel says “Whatever you are eating….that’s the best bit”

Laura says “The baby led weaning cookbook app is so good! Only £4.99 I think and so many good and easy recipes”

Karen says “Anything you eat.. (except honey if under 1 year). Cut into pieces that are longer than their fist initially so they stick out of a clenched hand. Let them go for it. Don’t worry how much goes in/down. Food before one is just for fun. As they get used to it make the foods smaller, you’ll be surprised how they’ll concentrate until they can pick up that pea! The book baby led weaning by Gill Rapley is fab”

Wendy says “Agree with above just feed them whatever you are eating. The only real rule is no honey until around 12 months. I’ve heard so many people say how much more enjoyable weaning is second time round because there’s no rules.”

Kath says “As the others have said anything you are eating. Often if my little one was on my lap while I was eating she would launch her hand onto my plate to try whatever it was. They do say that if they can’t handle it they won’t be able to pick it up (eg smaller foods like peas etc with that worry of choking). I remember at around 8 months old she got hold of a spare rib while we were having chinese and started munching on that!”

Jade asked “With the carrot sticks are they supposed to be cooked? Will be asking the exact same question in 6 months time”