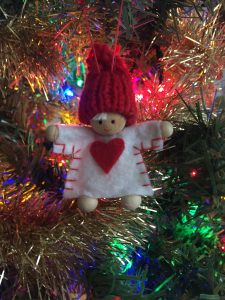 I REALLY don’t like the first few weeks of December.

I love Christmas, I love the time that we can spend together as a family, but these first few weeks of December are always soooo stressful.

My heart literally sank this morning when one of Miss NHM’s school friends started handing out Christmas cards. I had COMPLETELY forgotten about that. We are away this weekend, visiting friends that we don’t see very often and Miss NHM finishes school on Friday 16th December, which means I need to find a few hours after school one evening in the next week and a half, to “persuade” Miss NHM to write Christmas cards for at least 30 of her school friends. (After much talking to lots of my good friends scientific research , it’s pretty clear that Miss NHM is one of the most strong willed children that we all know, so I’m really looking forward to asking her to write these cards… I’m lying, obviously). And I’ve got to get her to do this in between her end of year parties for the few classes that she does after school, one of which is a pyjama party and I’ve just realised that we will have to open one of her Christmas presents early as all of her current pyjamas are far too threadbare to wear out and about in public!

And the also sudden realisation that I may also have to buy Christmas presents for some of her classmates. Even though I’m organised enough to have a “Present box” that I fill throughout the year with stuff when it’s a bit cheaper, it’s still never enough.

Last year I wrote 165 Christmas cards. Yup, 165. I know it’s my own fault for being so popular (:-D) and I LOVE getting Christmas cards in return, but 165. It took me a whole weekend last year. Sigh.

Thankfully, I set a precedent when we first got together, that Mr NHM does all of the wrapping in our house because I HATE wrapping presents, of any kind. I look wistfully at those presents that have been wrapped with the fancy bows and the ribbon that’s been curled “just so” but realised long ago that I just don’t have the energy for all of that crap creativity!

I also hate shopping. Yes, Amazon is an amazing invention but have you read up on how they treat their staff? I try to get everything sorted by November, to avoid the crowds, because people seem to be that little bit more grumpy in those first two weeks of December. Plus, parking is hellish everywhere.

Also, I just don’t get the “Elf on the Shelf”. Yes, it’s fab and yes I’m sure the kids love it, but where do their Mum’s get the energy from to do it? All that head space needed to come up with original stuff and then the time to put it all together when the kids are asleep, when all I want to do is lie on the sofa like a flat fish and try not too have a panic attack about how much more I still have left to do before the end of term! AND I’ve got to fit it all in around work!!?!?!?!!? Plus, I’m sure that “Elf on the Shelf” would make Emily Pankhurst spin in her grave, if she knew that she’d given up her life so that generations of future women could dedicate so much time to these slightly creepy elves! (I know, controversial :-D).

Oh and the Christmas play. The wonderful Christmas play! Last year, my first year of the “joy” that is the Christmas play, I got the “finger of doom” when Miss NHM’s YR teacher summoned me at pick up to say that if Miss NHM didn’t have her costume ready for the dress rehearsal the following day, she wouldn’t be able to take part. I wanted to elaborate on how Amazon Prime had lied to me that the black T-shirt I’d ordered wasn’t actually on Prime and wouldn’t be delivered the following day, but two weeks AFTER Christmas and that I was in the middle of leading a very large project worth $40M that was due in the following week. However, I knew this wouldn’t cut it, so I risked being sacked by schlepping through Asda and Sainsbury’s on my lunch break, trying to find a sodding black T-shirt so that Miss NHM could be a star in her Christmas play.

Then Miss NHM cried all through the performance we went to see because she wanted cuddles from me. Which should be super cute but when all of the other Mum’s tell you that she performed beautifully in the first two performances it’s a little gutting that you didn’t get to see her “shine” because she was so upset and I couldn’t even get to her to give her a hug as we aren’t allowed to even comfort our children when they are at school!

(This year, I was far more organised and had her outfit delivered to the teacher the day after the letter arrived at the end of November. Not that it made a difference because it was a completely different teacher, but still! And we’ve already sorted our game plan of hiding in the back so she doesn’t see us!!)

And the joy that is the Christmas stockings. I’m normally pretty organised with stockings, as I just delegate Miss NHM’s to Mr NHM and do my Mum’s myself. However, this year Mr NHM rudely got himself a new job, which means he’s working 5am to 4pm every week day and isn’t on shift like he used to be and therefore isn’t around to just “nip” to the shops to pick up a few bits when needed or to wait in the post office queue for an hour when he’s off shift. Plus he’s bloody knackered from working such long hours. So this year it’s all down to me. Last year, I actually forgot about Mr NHM’s stocking until about three days before Christmas. Opps!!! Thankfully, I don’t think he reads these posts so I haven’t been busted yet!

Plus, it REALLY annoys me when he says that he won’t write his Christmas wish list because I should just “know” what he wants. Er, no darling. After I’ve bought ALL of the Christmas presents, written ALL of the Christmas cards (he doesn’t believe in sending any cards of any type. . I won’t go into the drama last year, when I sent his parents their Christmas card later than everyone else’s!!!??!!), sorted all of the Christmas “schedule”, worked out all of the food, done EVERYTHING to do with the school Christmas (Christmas lunch, christmas outfit, school friend cards, school friend presents, and all the other “stuff” I’ve forgotten”), done the advent calendars, I don’t actually have any capacity to come up with whatever he might like for his Christmas present. However, this year he has learnt and has given me a list in advance because I think he may have been a teeeeeeny tiny bit peeved that his stocking last year contained lots of things that I actually wanted, Hehe.

And I MUST not forget the Father Christmas mince pie, carrot and reindeer food. Because she’s old enough this year. She understands! She gets it! So if I screw up, she’s going to be scarred for life and will always remind me (like she does already when I’m so tired and call a plate a bowl. “No Mummy, that’s a plate, silly! in that slightly condescending voice that she uses just for me”) that I ruined that Christmas for her when she was 5 and three quarter years old. I definitely preferred it when she was younger and less vocal :-D.

Oh and the Christmas Eve box, which I thought I was organised for until I realised that Miss NHM’s Gran has bought the video I wanted to get for the box (I’d put it on the wrong wish list. DUH!), from the Amazon wish list that I was all smug about setting up in advance (oh the joy of being able to see what’s been purchased in advance on an Amazon wish list!) and Miss NHM refused to even watch Arthur Christmas (U) at the weekend on Netflix because it was “too scary” so now I have to negotiate with Gran to see if I can have that DVD and she can buy another one. Plus, I now need to get more pyjamas because we’ve had to use the Christmas eve box pyjamas for the pyjama party this Thursday (see above!)

Yes, I know this reads that I’m very bah humbug this year and I really do LOVE Christmas, it’s just all of the pressure and stress that comes with it, and despite however much planning or organisation I do in advance, I never seem to quite make it in time.

And this post is for all of my friends who are under the delusion that I’m organsied :-D.

I love it when school finishes and Mr NHM and I finish work and we just stop for a few days.

Just stop and chill and relax and have lie in’s and pyjama days and stop. But I’ve realised that we HAVE to stop by the time it comes to Christmas because we are all completely on our knees!!!!!

So all I want for Christmas this year is… a rest, please. Oh and a magnum of Prosecco. Obviously ;-).

Merry Christmas and may you not be sucked into the “end of term” vortex of chaos. Good luck!!! 😀

One thought on “I have a confession to make…”