Thank you very much to Helen, one of the NHM writers, who went to see this show yesterday, courtesy of the Proteus Creation Space team (thank you for the tickets!) and has already written her review, so that you can review it in advance of the shows later today! 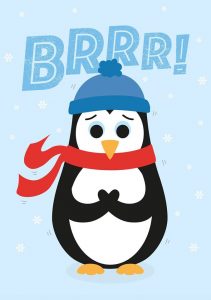 We had a brilliant time. A perfect way to spend an hour on a cold November afternoon. Lots and lots of laughter and smiles. Special time with my little boy!

Brrrr tells the story of Steve, a penguin who doesn’t like the cold. Steve dreams of travelling to South Africa, a magical land with three suns, tiny elephants and hot snow. When Beryl the bird accidentally crashes into his world they set off together on a voyage to this magical land. Brrrr is a play come acrobatics show designed specifically for younger audiences (children aged 3years +). I went along to Proteus Creation Space to see it with my 4 year old son. We had high hopes being huge fans of the Proteus children’s Christmas shows (tickets are now on sale for this years Christmas show by the way!).

Brrr is performed by three actors using a relatively small and simple set, which is perfect for young children. The show is funny, visually entertaining, captivating and heart-warming. The story is told primarily through simple dialogue supported by music, narration and sign language (BSL), which is integrated seamlessly.  My son belly-laughed his way through and even got up for a dance; we both had a wonderful time. The cast were flexible and responsive to the audience and there was some participation in the form of singing, cheering and touching the snow. If you’re able to catch brrrr whilst it’s showing I thoroughly recommend you go along, the cast and crew should be congratulated on creating such a fun and genuinely inclusive performance piece.

Brrr is showing at Proteus creation space on Sunday 6th at 11am and 3pm and at venues across the region through to December 4th . There is a relaxed performance on Wednesday 9th November at 7pm (Proteus Creation Space).

Programmes at £2.50 and include a story book version of Brrr as well as a wordsearch and some colouring in. You can download an audiobook version of the story at the above website.

The room at Proteus has bean bags at the front for little ones if they want to be close to the action.

The run time is around 70 minutes. My son isn’t known for his ability to sit still and did jiggle around a little but made it through without any problems. I can imagine it would be a little long for children under 3 though, obviously depending on the child.

There is probably an age at which children wouldn’t get so much from this performance. It’s difficult to say what that age would be – maybe around 8 years although this obviously depends on the child too.

The show didn’t contain any unexpected loud noises or anything ‘scary’.

Every venue will be different but Proteus has baby changing, toilets, a café and parking.