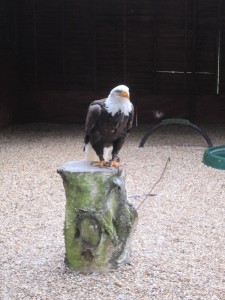 Everytime I go to the Hawk Conservancy, I have a fantastic time. When you look at the site plan, it doesn’t look very much, and yet after 5 hours of being there, we still hadn’t done everything!!

When we arrived we were asked if we would like to take part in the “Sarson Falconer” session, which took place in the afternoon, as there were still spaces available. Mr NHM and the boys weren’t that keen, but I persuaded them that it would be a once in a lifetime opportunity, their debut on the stage, and that I would do the boring thing and look after Miss NHM whilst their made their debut’s.

Being involved in this event ended up being the highlight of the day!! The boys and Mr NHM didn’t stop raving about their roles for the rest of the weekend. I had to bite my tongue with the “told you so’s!!!” lol.

Each of the children were also given a card, which had 10 stamps of birds that needed to be collected. It took us all day to fill the card up, but even Miss NHM was on board with shouting “Stamp!!!” when we found the last few.

We had arrived just in time for the Vulture feeding at the Vulture Restaurant. The 14 year old thought this was brilliant. It was very interesting to hear about how threatened Vultures are in the wild and what the Hawk Conservancy trust are trying to do to protect them. Plus, seeing the Vultures feeding was an experience!

We then went to the World of Birds of Prey flying demonstration which was brilliant. Madelaine the Secretary Bird was my favourite. You should see her whack that poor rubber snake! lol.

At the end of the flying demonstration there is an opportunity to hold a British bird of prey. Both boys and Miss NHM held an Owl. I have some fantastic pictures and the 8 year old was very proud of having done this. Miss NHM spent most of the day then saying “WOW said the Owl” as we have the book at home. It was great to be able to relate this experience to the book for her. 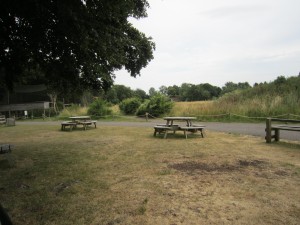 The boys had to eat fast as they needed to prepare for the “Sarsoner Falconer” session as they were given instructions on what to do and were given outfits to wear. I had to entertain Miss NHM for an hour and when she started to get really cranky the Gypsy caravan opened for ice cream and coffee, which saved the day!

The boys and Mr NHM made their debuts as “Plough man and Plough boys”. They all looked very cute in their smocks and I managed to get some fantastic photo’s, despite having a wriggling toddler on my lap. They then got front row seats for the rest of the performance. 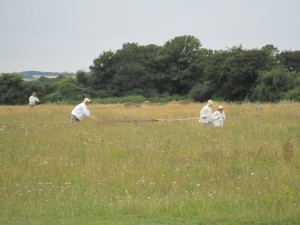 The birds were amazing. The Valley of the Eagles show is my favourite by far, because I’m not sure there are many other places were you can nearly get a Vulture flying into your head!!! (Note to self, don’t sit up when you feel a Vulture fly over your head, as there’s probably another one right behind it!! Boy was that a close shave, I even felt my hair move!!! lol). 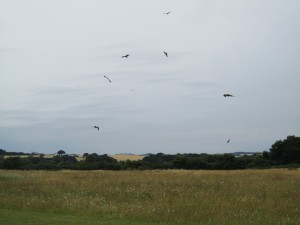 Oh, and this is just a side note for the girls, but I have to say that the Falconer’s outfit in the Sarsoner’s session REALLY did it for me! :-D. Don’t knock it till you’ve seen Gary in his outfit! LOL.

I really like the presenters at all of the demonstrations as they make it all sound so fun, and take it all on the chin when things don’t exactly go to plan.I even learnt something about what a “cadge” is. I missed the last bit with the Bald Eagles flying in, but apparently it was amazing.

After the demonstration we went to find the Play area and had a lovely time playing on all of the different equipment. 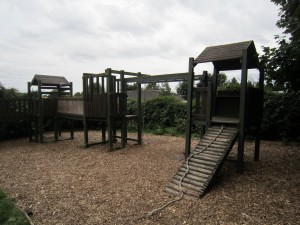 We then spent the rest of the day walking around the site and getting our remaining stamps. I would have liked to have stayed for the Ferret racing but Miss NHM was getting cranky as she was well over due for her nap.

We had a brilliant day out and I was so pleased that the boys also enjoyed their day. I think the reward at the end for completing all of the stamps also helped 😉

We took a picnic with us, but we had a look in the restaurant and it looks REALLY nice. I did have some of the ice cream from the gypsy hut and it was some of the best ice cream I’ve ever tasted!

I completely forgot to check these as we did an eu-natural nappy change when no one was around.

We got a family ticket for the 5 of us and it was very reasonable. Under £40 which I thought was great value for money considering what was available and how much fun we had.

The staff are great, the site is great and there’s a real friendly atmosphere. I love that it’s a family owned place and also supports vital work in other countries.

We went on a Saturday in the summer holidays and I was surprised that it wasn’t busier. Apparently Saturday’s are change over days for people on holiday, so it tends to be a quieter day. Tip for us locals 😉

My only comment is that there weren’t any recycling facilities that we could see. Otherwise, it would be a 5 out of 5!