I LOVE Finkley Down Farm. I’ve been visiting, on and off, for the last 30 years (OUCH!). It’s been great to see how it’s developed over that time. I remember the old gypsy caravan, when you used to actually be able to go into it and sit on the beds. Anyone else remember that? lol.

There is SO much to do at Finkley Down Farm. It’s quite small so it’s easy to walk around and there’s a lot packed in. A new “play barn” was built this winter and it’s massive! We went on a Sunday morning, and it was very quiet until 12.30pm, where it started to become very busy. I’d expected it to be very busy, but was really pleased to see how quiet it was.  We spent a lot of time in the Rabbit Barn because my Little One loves the rabbits. We then ventured over to the Mini ride on Tractor field and my Little One practically had it to herself for 30 minutes. She had to go on every single tractor! lol. 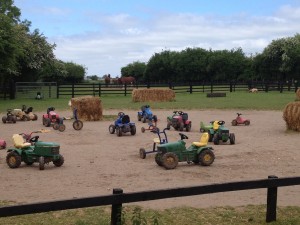 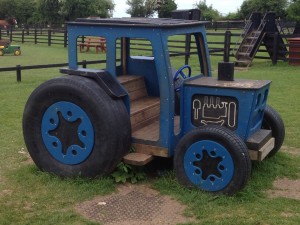 We then wandered back through the farm and went over to the Little Tikes play area. My Little One loved this area and we spent a good 40 minutes playing on the slides and on the trampolines. 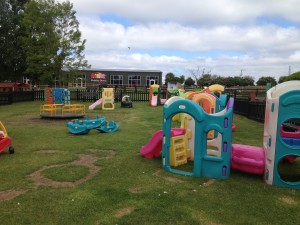 I then noticed that there were five very large trampolines nearby that were deserted, so we went and had a go on every single one!! Well, I wasn’t allowed because it was for 10 year old’s and under but my Little One had a whale of a time. She just LOVES bouncing. 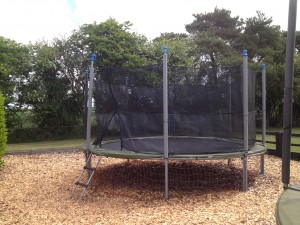 We then went back through the farm again. We didn’t attend any of the Handling sessions because I think my Little One is too young to handle farm animals, at 27 months old. But this is obviously a personal choice. We spent a lot of time watching the Ferrets, which were very funny and then talking to the Ducks. We also went into the Touch and Feel barn again but my Little One was a bit freaked out by the sheep that were “baa-ing” very loudly. At that point, we were both exhausted so went and had our picnic, had one last go in the Little Tikes play area and then headed home.

We had a look in the new Soft play barn when we arrived at 10am (it’s massive!) but decided we would come back later on. When we did go back, the place was heaving. Which was a little disappointing as it seemed most people were inside, even though the weather was nice. It was always an issue before if it rained at Finkley as there weren’t many sheltered areas, but now the Soft Play barn has this covered!

We took our own picnic (we remembered it this time! lol). I did have a quick look at the menu and it seemed reasonable, but without many healthy choices. I did think that £3 for a slice of cake was a bit steep. 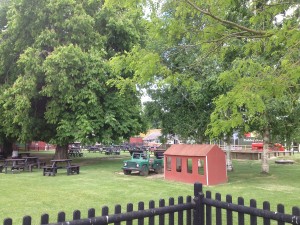 Were never that great but they have improved radically over the past few years. However, I was a bit disappointed that I could find any recycling facilities on site, especially as they sell drink cans.

Are near the entrance. There are a few baby changing tables and a few nappy bins. All seemed in good condition.

Is free and there is lots of it. When the main parking area is full, they open up a field nearby and you can park here.

Maybe I’m getting old, but I was surprised at how expensive the day tickets are. I think I’m getting wise to this now, after my Wellington Country Park review! lol.

They also do a reduced after school rate and Serving Military Personnel discount.

However, if you live near Andover or plan to go to Finkley more than four times in a year, the best option by far is to get the Season ticket, which is cheaper if you buy it online.

Finkley has a special place in my heart, because I’ve been going for such a long time. So I’m giving it a 4.75 out of 5, because it isn’t cheap and doesn’t have recycling facilities, but we always have a fabulous day out there!