Trash will turn to treasure and plastic will become fantastic as Festival Place, Basingstoke, launches a major summer recycling initiative to encourage shoppers to have fun while playing their part in helping the environment.

The shopping centre is inviting visitors to donate plastic bottles and packages which will be remodelled by an on-site artist into weird and wonderful robot sculptures during the summer holidays. Schools, community groups, businesses and individuals which would like to donate materials and have a sculpture displayed are asked to contact Marketing@festivalplace.co.uk

As part of the scheme, a series of eye-catching plastic “Recyclabots” – Maggie Zine, Alan Minium, Bev Ridge, Cap‘n Lidov, Carrie O’Bag, and Diana Thirst –  will go on display around the centre to encourage shoppers to drop off their materials. There will also be a prominent plastics recycling drop-off point in Porchester Square from July 30 to start the campaign, which will run until August 19. 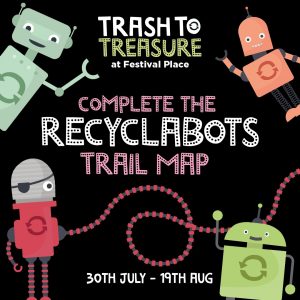 The scheme will include an action-packed activities programme for families, including a “Robotrial” treasure hunt and a series of free craft activities from August 13 to 19 so children can create their own unique robots from the collected recycled materials.

Schools and community groups are also being invited to build their own recycling robot. The sculptures, built out of anything from cardboard to plastic bottles, will go on display in the shopping centre.

Shoppers will also be able to take part in an entertaining game called “Uppy Cuppy” – where they are challenged to hold up as many cups as they can. Participants will win a stylish and environmentally-friendly reusable cup. Members of the public will also be able to visit the “Carrie O’Bag” station to exchange their plastic bags for a brown paper reusable one.

Shoppers will be invited to share all their artwork and photographs on social media using the hashtag #FPRecyclabot.

The initiative comes amid Festival Place’s ongoing commitment to help the environment and raise awareness. The shopping centre was the first in the UK to operate an on-site Materials Recovery Facility (MRF) and Food Digestion Facility, turning food waste into grey water that can be re-used.

“We have called upon the expertise of an artist who specialises in creating amazing sculptures out of plastic and the creations will form a spectacular backdrop to all the fun activities we will have going on. It’s a spectacle people will not want to miss!” 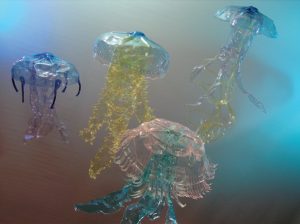 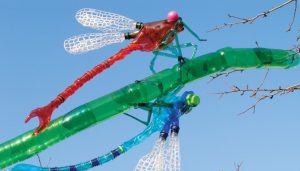 Festival Place is committed to helping the environment and has led a number of green-friendly initiatives. Key achievements include:

Emily added: “Festival Place continues to be a national leader in spearheading environmentally-friendly initiatives and we hope our summer campaign captures the imagination and gets even more shoppers recycling.”

The Trash to Treasure campaign is one of a series of events scheduled at Festival Place during 2018. For further information visit www.festivalplace.co.uk or find details on Facebook, Twitter and Instagram.